Gold in 2022 lost to the dollar in the fight for the status of the main safe-haven asset without options. Therefore, neither the high degree of geopolitical risks, nor the proximity of inflation in the US to 40-year highs helped XAUUSD. The precious metal quotes have collapsed by about 20% from the levels of their March peaks, money managers are holding clean shorts for gold for the first time in many years, and the outflow of capital from ETFs does not stop for a minute. It would seem that the precious metal is doomed to fall to $1,500, but suddenly the rules of the game have changed. 5363

Along with rising Treasury bond yields, the strong US dollar regularly drove the nails into the coffin of gold. Its position seemed unbreakable: the US economy looked better than the rest, the Fed was aggressively raising rates, and high risks of a global recession supported the demand for the greenback as a safe haven asset.

However, as soon as the US economy began to falter, at least two of the dollar's three trump cards began to look less strong than before. Weak statistics on real estate prices and consumer confidence increased the risks of a recession in the United States, while falling gas prices in Europe, on the contrary, reduced them. American exceptionalism was called into question. This circumstance, coupled with expectations of a slowdown in the rate of monetary restriction by the Fed, weakened the dollar against major world currencies, which extended a helping hand to the "bulls" on XAUUSD.

Investors immediately remembered geopolitical risks—the degree of which is still high. The armed conflict in Ukraine, the testing of nuclear missiles by North Korea, and the escalated aggression of China after the prolongation of the terms of Xi Jinping in power are far from a complete list of events that served the precious metal faithfully and faithfully in the past.

The pressure on the US dollar is exerted by an improvement in global risk appetite against the backdrop of a slowdown in the Fed's monetary restriction, which is expected by investors. Peak federal funds rates and other central bank rates are within easy reach. If so, a global recession could be avoided, reducing the demand for safe-haven assets. 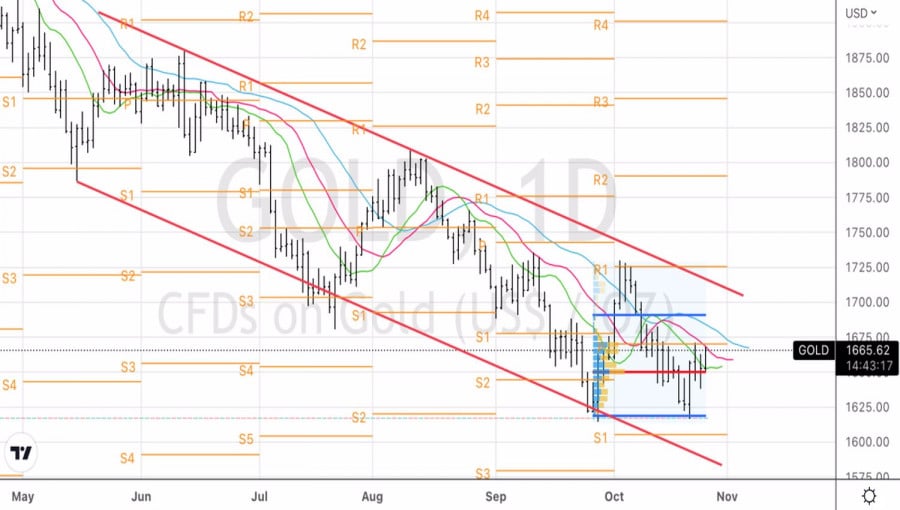 Thus, the conditions for the correction of stock indices and opponents of the US dollar in the foreign exchange market are ripe. How long will this Wednesday last? Previous episodes in August–October showed that either macro statistics or the Fed became the catalysts for the recovery of the upward trend in the USD index. In this regard, the November meeting of the FOMC can restore investor interest in the US dollar and plunge the precious metal into another wave of sales. Technically, the formation of the Double Bottom pattern on the gold daily chart at the lower end of the fair value range of $1,620–1,1690 per ounce is a powerful reversal signal. Nevertheless, it is too early to speak about the change of the "bearish" trend to the "bullish" one before the return to $1,725. We sell the asset on the rebound from resistance at $1,680 and $1,695.