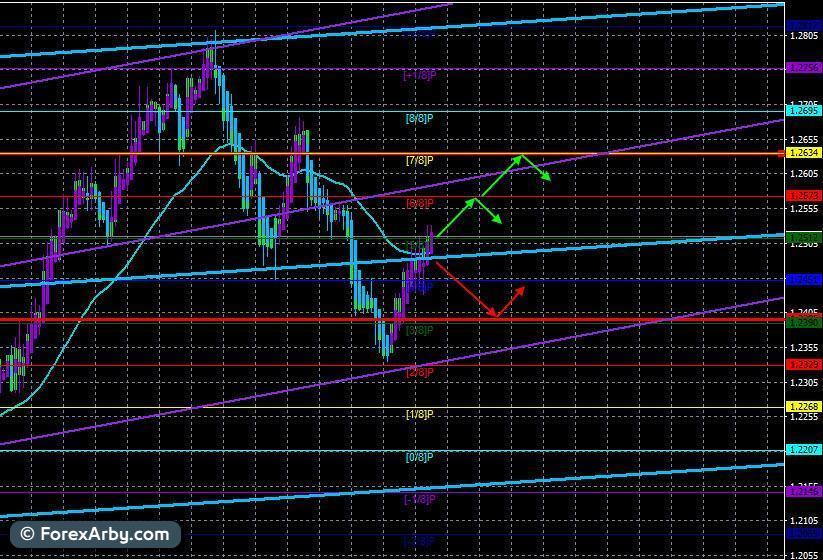 The British pound continued its upward movement during the second trading day of the new week. However, it was not as strong as the Euro currency, so by the end of the day I only managed to reach the moving average line and rise just above it. Thus, the GBP/USD could also turn bullish, although we still don't see what could make the British pound more expensive against the dollar.

However, we don't think the issue is the Euro or the Pound and market participants' demand for these currencies. The issue now depends entirely on the United States, Trump and the US dollar. Indirectly, this hypothesis is confirmed by COT reports, which show that the demand for the pound and the euro currencies did not rise during the period of the rise of these currencies, as well as the fact that both currencies have moved almost simultaneously in recent weeks.

From the UK on Tuesday, June 23, we received data that business activity in the manufacturing and services sectors increased significantly in June and reached 50.1 and 47.0 points, respectively. This is good news for the British pound, but we are not sure that these reports were the reason for the strengthening of the British currency.

Although the strong business activity indicators did not cause any reaction from the traders. Also yesterday, Andrew Bailey, Governor of the Bank of England, gave a speech in which he recently decided to expand the asset buyback program by £100 billion. Andrew Bailey had nothing more interesting or important to say. Therefore, his words also could not provide any support for the British currency. So, but it is the US dollar that is declining. But the reasons for the latter can now be found in huge numbers.

Any decrease or increase in the currency market can be “explained”. The only question is whether this interpretation is correct. We believe that the only reason why the US currency is falling now is the lack of confidence of traders and investors in the dollar against the background of the escalating situation between China and the US, as well as against the background of the escalating political crisis.

All market players have plenty of time to assess the current situation and decide on which assets to transfer their money to. Thus, the fact that the dollar began to fall in price only in the last month, in principle, is not surprising. As this month, more and more criticism fell on Donald Trump, and his name is no longer associated with the prosperity of the country.

In addition, do not forget that in the United States, the “coronavirus” continues to spread. Recently, a record number of cases of infection were recorded in 8 states. However, the topic of "coronavirus" has disappeared from the front pages in the United States. Anthony Fauci is no longer speaking, and Donald Trump himself has not touched on the topic of "coronavirus", perhaps realizing that this topic is of no use to him at all.

But Trump began his campaign tour of American cities, ignoring all the warnings of doctors. However, not all Americans are willing to blindly follow Trump and most of them are people who are afraid of the COVID-19 virus. In the US city of Tulsa, Oklahoma, where Trump held his first election rally, the stadium, designed for 19,000 seats, was filled by about a third. "Tomorrow we will have a busy night in Oklahoma," the president promised before the rally. But it did not work. It turned out to be a "sad evening".

Trump headquarters, which claimed that more than a million requests to attend the event had been received, shamed the entire world and was forced to exit quickly, saying that the low turnout was due to the "BLM" protesters who allegedly blocked roads to attend. And from everything that happened in Tulsa, we can draw several conclusions.

First, the Americans protesting against Trump. If, as representatives of the US President's staff say, they denied access to the stadium. There are a lot of protesters in America.

Second, the Americans were not particularly keen to support their leader even without the protesters, because their health is more important.

Third, an entire movement called "Don't Go to the Trump March" has been launched online. Where Trump opponents buy tickets to attend, they don't intend to go there at all. And it was this information that forced everyone who went to the stadium to sign a paper about the absence of allegations against Trump in the case of coronavirus.

There are no major events or news scheduled for Wednesday, 24 June in the UK and US. There will only be a UK inflation report hearing, but inflation itself is not playing any significant role now. Thus, tomorrow will be an empty day in terms of macroeconomic and fundamental events. Unless Donald Trump or other White House officials make new surprises. 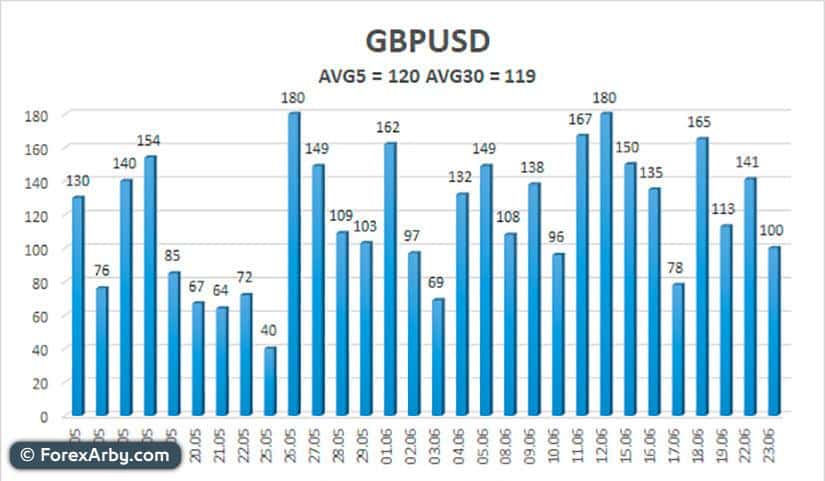 The average volatility of the GBP/USD pair remains stable and is currently 120 pips per day. For the pair now, those numbers are "high". Thus, on Wednesday, June 24, we expect a movement within the channel limited by 1.2395 and 1.2634 levels. The Heiken Ashi reversal down indicates that the downtrend may resume.

The GBP/USD pair broke the moving average line on the four-hour time frame. Thus, today, continue to buy the pair with a target of 1.2573 and 1.2634 and continue to open long positions until the Heiken Ashi indicator falls. It is recommended not to sell the GBP/USD pair unless prices fall below the moving average with first targets 1.2451 and 1.2395.