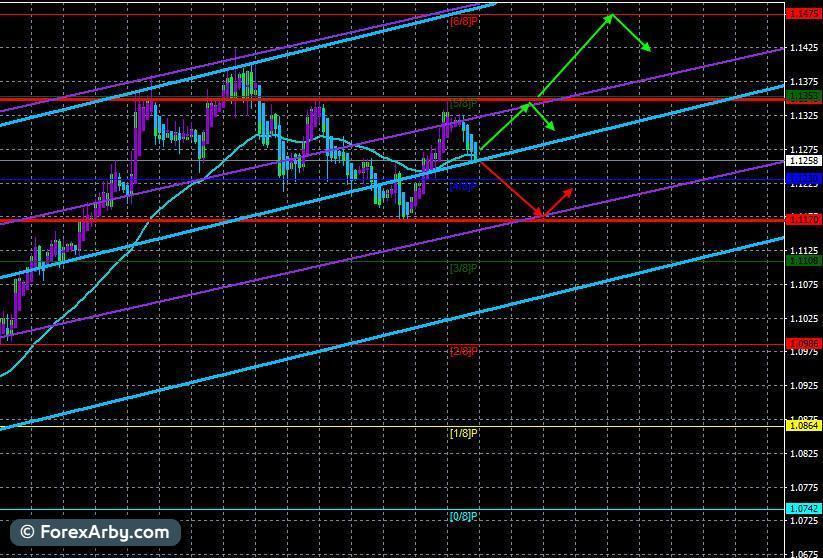 The third trading day of the week for the EUR/USD currency pair was in a corrective move on the back of a complete lack of any fundamental information and macroeconomic reports. During the day, traders simply had nothing to respond to, and nothing to watch out for. Thus, the EUR/USD pair began to adjust.

At the same time, the technical picture now looks interesting and allows us to make some assumptions about the future movements of the currency pair. For example, over the past day, traders managed to approach the -1.1353 “5/8” level and bounced back from it. This is the second time that traders have failed to break above this level in the past two weeks. Thus, this bounce could push the pair down again to the previous local low at around 1.1.

However, traders are now clearly interested in the bullish trend, which appears to have resumed this week. We believe that from a fundamental point of view, the prospects for the European currency are quite ambiguous, however, it has certain opportunities for continued growth. The problem is that in recent weeks, the euro currency has already grown significantly, rising by about three cents against the dollar. For comparison, the dollar rose by two years during the entire previous year. The reasons are vague. The growth of the euro can be associated with the political crisis in the United States, a high probability of ending the trade deal between China and the United States and, as a consequence, the beginning of a new trade war or even a “cold” war.

It is not entirely clear what will happen to the country after the elections and who will win these elections. It is not entirely clear what to do with the “coronavirus,” which continues to spread quietly across the United States, taking more and more American lives. In general, now the number of such “vague points” is so great that it is almost impossible to apply fundamental analysis in the general analysis of the currency market. By the way, we would like to remind you that during the 18-month trade war between Washington and Beijing, the dollar did not feel particularly strong pressure on itself. Thus, so far, the risks of escalating the conflict are nothing but risks. But no one knows how these risks are interpreted by the major players in the market. Perhaps there is more classified information in the upper circles about the future relationship between Beijing and Washington. In general, there may be much more important information, however, it is not available to ordinary traders.

But the information available to ordinary traders now says that Trump is still reeling from defeat after defeat in 2020. He has been repeatedly criticized by senior officials and members of the Republican Party. Now open war against him has been declared by his former adviser, John Bolton, who has written a book revealing many aspects of the president's work. Of course, Trump immediately threatened Bolton with legal action, but what difference could it make? The main aspects of the book became known to all. This is another blow to Trump's political rankings.

Most importantly, Trump no longer believes him. His Twitter posts are becoming increasingly fake. Many media and experts note that Trump constantly makes contradictory statements, the essence of which is not entirely true. Some of them cannot be verified, and this is where the US President begins to run into problems. Only on that day, Donald Trump publicly accused, as usual, former US President Barack Obama of treason. Trump believes Obama administration employees spied on his 2016 campaign.

Trump accused Obama of doing everything possible in 2016 to prevent him from becoming president and hinted that Democrats might try to move something like this in 2020. "This is high treason," Trump said in an interview. When I spoke a long time ago, I said they were spying on our campaign. It turns out I was right. We'll see what happens to them now." Well, most political analysts immediately agreed that with “Obamagate,” Trump is trying to cast a shadow on his current challenger for the presidential seat in the election, Joe Biden, who was Vice President under Barack Obama. What is this if not a political crisis?

On Thursday, June 25, a slew of important macroeconomic reports are planned in the US, including durable goods orders, first-quarter GDP, and jobless claims. The last report can be safely passed, however, you need to focus on the first two. Most important, of course, is the GDP report, which is expected to be -5%. Remember that in previous readings, US GDP losses were expected to be 4.8% in the first quarter. Therefore, this time the real losses may also be higher than expectations. And if that happens, the US currency may once again be under market pressure. The same applies to the first report on durable goods orders. This category of goods is distinguished by a high cost and a long service life, respectively, which significantly affects the economy and GDP. All four derivatives are expected to rise compared to the previous month. If expectations are not met, the US dollar may once again come under pressure from traders.

But from a technical point of view, everything is simple. If the pair crosses the moving average, the downward movement will continue to around 1.1200. If it bounces, the price will return to the “5/8” level -1.1353 at least. 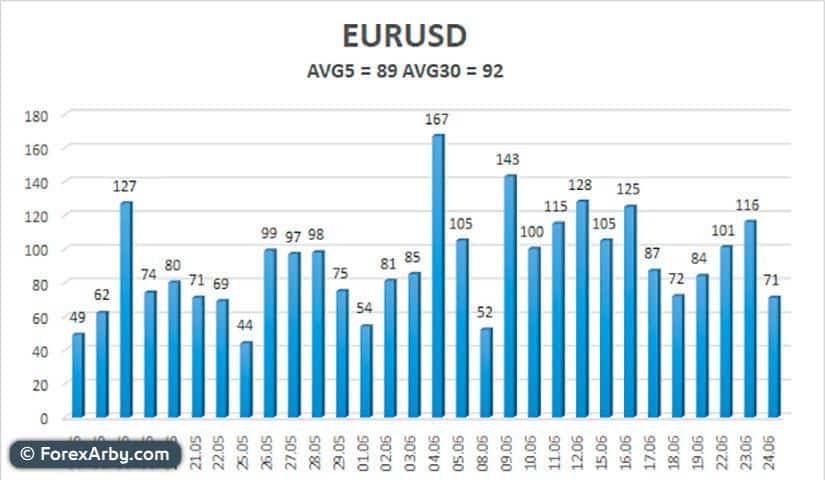 The average volatility of the EUR/USD pair as of June 25 is 89 points, and now the value of the indicator is marked by “average”, in general, volatility continues to decrease. We expect the pair to move between 1.1170 and 1.1348 levels today. A reversal of the Heiken Ashi indicator to the upside will indicate a possible resumption of the upward movement.