It became clear after the FOMC meeting that the US Federal Reserve does not intend to raise interest rates until at least 2023. The Fed will not change other parameters of the quantitative easing (QE) program either as long as US inflation is increasing.

The bill signed by US President Joe Biden on a new $1.9 trillion package, according to the Federal Reserve, is a sufficient measure to stimulate the economy at this point.

This position of the American regulator took an equal reaction between the bulls and bears in the EUR / USD pair, as a result of which the pair spent the whole week in a narrow side channel with a capacity of only 110 points, 1.1875 -1.1985 and closed the trading session near the level of 1.1900.

As mentioned above, the Fed refused to adjust its monetary policy. The Bank of England management refused to do the same unanimously at its meeting on Thursday, March 18th. According to their statement, the bank “does not intend to tighten monetary policy at least until there is clear evidence that the untapped potential is being used. and achieving the 2 percent inflation target.” Therefore, one should not expect a rise in interest rates on the pound.

As a result of the identical decisions of both regulators, the GBP/USD pair continued to move sideways.

The Bank of Japan left the interest rate at the same negative level, -0.1%, on Friday, March 19. Meanwhile, it will continue to buy back long-term bonds in order to keep the yield on the 10-year bond near zero. The bank management's statements regarding the prospects for monetary policy were also vague, "We are ready for changes as necessary." The criteria for this "necessity" are not specified.

The result of this “slow” week was the USD/JPY pair consolidating in an even narrower range than EUR/USD and GBP/USD. After holding steady in the channel 108.60 - 109.35 for all five days, it closed at 108.87

Bitcoin renewed its all-time high over the past week, hitting $61,670. This was followed by a rapid retreat. However, the major currency managed to stay within the ascending channel, after finding support at its lower border, in the $53300-53900 region. This correction attracted buyers who are waiting for a new buying opportunity, and the BTC/USD pair is trading near $58,500 on the evening of Friday, March 19th.

According to the calculations of investment firm Compound Capital Advisors, bitcoin has become the most profitable investment in the past 10 years and has outperformed all asset classes by at least 10 times, providing an average annual return of 230%. The Nasdaq 100 index came in second with an annual return of 20%, followed by US stocks with a market capitalization of over $10 billion with an annual return of 14%. Studies have also shown that gold has shown a meager 1.5% return annually since 2011, and five of the past 11 years have caused losses for this asset.

All these numbers are impressive to some, and frightening to others. For example, the head of payment giant Visa agreed that cryptocurrencies could become widespread within the next five years. In addition to JPMorgan, the largest US bank, Morgan Stanley, has shown loyalty to digital assets, promising to provide its large customers with the opportunity to own bitcoin.

But Bank of America published its “Little Dirty Secrets of Bitcoin” report on March 17, in which it declared the token to be an exclusive speculative tool.

Without the price hike, there is no reason to own this cryptocurrency, the report says. “The asset is impractical either as a store of value, or as a means of payment, and 95% of Bitcoin is owned by only 2.4% of wallet holders. “The bankers noted the negative impact of BTC on the environment due to the high energy costs of mining as well as the low transaction speed. Although, one can guess that it is not what they worry most about, but the possibility of losing a significant share of the income due to the development of the cryptocurrency market.

Note that the total cryptocurrency market capitalization over the past week has increased from $1,756 billion to $1,805 billion. However, he could not break through the psychologically important level of 2 trillion dollars: the maximum value of 1851 billion dollars was reached on March 14, after which the indicators fell slightly. As for the Crypto Fear & Greed indicator, it is practically unchanged during the week: 71 now versus 70 seven days ago.

In general, both experts and indicators have a bearish mood. Despite the US Federal Reserve's refusal to raise interest rates until 2023, investors are still guided by the favorable economic scenario. Mass vaccinations and direct payments to US citizens should support the dollar, although some of that $380 billion will be invested in riskier assets.

Most analysts (65%) expect the dollar to rise next week. In their opinion, the EUR/USD pair should retest the 1.1835 support. The bearish forecast is also supported by 65% of oscillators and 85% of trend indicators on the H4 and D1 timeframes.

The graphical analysis also indicates a decline in the pair. Well, not immediately. Initially, according to his readings, having fought the 1.1880-1.1900 area, the pair should rise to the level of 1.1980, and only then head south.

As for the events of the coming week, mention can be made of Jerome Powell's numerous speeches on March 22, 23 and 24. However, he is unlikely to say anything new: everything important has already been said last week. Therefore, we advise you to pay attention to the data on the trade activity of the German Markit and the Eurozone, which will be announced on Wednesday, March 24th. As for US statistics, durable goods orders data will be published on the same day. , and annual data on the gross domestic product of the United States the next day.

It is clear that the technical indicators on the GBP/USD pair at H4 are heading south. However, it only reverses the trend of the last two days of last week. As for the indicators on D1, there is complete disagreement: a two-week sideways trend is visible. The graphical analysis on both time frames also indicates a sideways trend in the trading range a week ago - 1.3775-1.4000. There is no serious predominance of expert expectations: 45% on the side of the bulls, 55% on the side of the bears. The targets are 1.4240 and 1.3600, respectively.

The increase in the strength of the dollar and the growth of the pair are indicated by graphical analysis in both time periods, H4 and D1. 85% of trend indicators and 65% of oscillators on D1 agree with her. The rest of the oscillators are either overbought or already colored red.
As for experts, 55% of them expect a correction in the south, although they agree that it may be short-lived. However, with the transition to monthly and quarterly forecasts, the number of supporters of a fall in the pair increases to 75%.
The closest target for the bulls is 109.50-110.00. Support levels in the event of the pair falling are 108.35, 106.65, 106.10 and 105.70

The struggle between those who believe in the bright future of cryptocurrency and those who anticipate its collapse continues. This is especially noticeable among large institutional investors. Their opinion largely depends on the opinion of the organizers.

The position of regulators in different countries varies greatly. For example, the Indian authorities have a bill almost ready to ban cryptocurrency and impose criminal and administrative liability for miners and traders. Conversely, US Federal Reserve Chairman Jerome Powell does not deny the combination of traditional finance and cryptocurrency. Although, of course, he is pinning his hopes on the digital currency of the US Central Bank (CDBC).

Note that the governments of many major countries are considering the possibility of issuing digital counterparts to their fiat currencies. And of course, they don't want competitors so it is possible that we will see real battles between the public and private sectors in the near future, on all international platforms.

Meanwhile, central banks continue to print unsecured money to support their economies in the fight against the COVID-19 pandemic. According to TV presenter and founder of investment firm Heisenberg Capital Max Kaiser, this will lead to a "hyper-inflationary collapse" of national currencies and bitcoin's growth to $220,000 this year. Moreover, Kaiser believes that Bitcoin's advantages in global payments will render banks useless. As he stated, “$5 trillion per day in the foreign exchange market can be completely exchanged for bitcoin.”

At the moment, according to analysts at JPMorgan, the main focus is on the growth of retail investment associated with the next part of payments to US citizens as part of the economic stimulus program. According to a study by Mizuho Securities, of the $380 billion that US citizens will receive in the form of economic assistance, about 10% can be spent on buying two types of assets: bitcoin and stocks. The study found that two out of five Americans expecting to receive checks in the coming days intend to use some of that money to invest. According to Dan Dolev, Managing Director of Mizuho Securities, Bitcoin is expected to account for 60% of the total investment, which could add about 3% to the cryptocurrency's market capitalization.
Of course, 3% is a small number. Perhaps that is why only 35% of experts believe that the major cryptocurrency will be able to gain a stable foothold above $60K by the end of spring and even rise to $75K. The majority of analysts (65%) expect Bitcoin to be sideways in the $50,000-$60,000 channel. 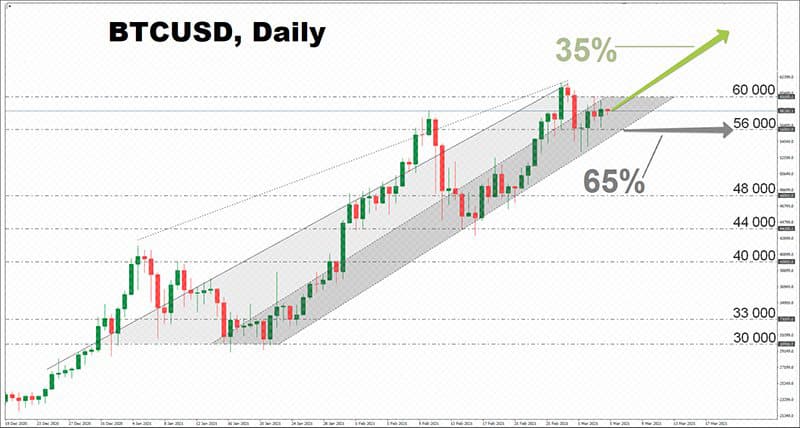