It is worth noting that a rather unusual situation has developed in the market since the beginning of 2021. Usually, a rally in the stock market leads to downward pressure on the dollar. This is exactly what happened in the previous month: the S&P500 index grew steadily, driven by the appetite for risk, while the dollar index, which plays the role of a defensive asset, was steadily declining.

According to Bank of America, in December, major investors were hoping for a quick victory over COVID-19, a spike in GDP, and were actively buying technology stocks and were also actively dumping the dollar. And now the situation has changed dramatically: the DXY index began to grow in parallel with the S & P500.

What is the reason for that? First, US stocks appear to be overvalued at the moment. At least from the point of view of American investors. In addition, after the adoption of US President-elect Biden and the majority of Democrats in the Senate, the yield on US 10-year Treasuries rose sharply, pulling the dollar with it. Federal Reserve Bank (FRB) leaders in Richmond and Philadelphia added fuel to the fire, hinting at a possible curtailment of the quantitative easing program and an increase in dollar interest rates; The bulls started closing long positions in the EUR/USD.

Over the past five days, this pair has painted a clear sideways pattern, moving in the 1.3450-1.3700 channel along the 1.3575 pivot point. At first, it fell to the lower end of this trading range, then turned around and rose sharply, reaching values of 2.5 since Wednesday.
The pound was supported last week by the head of the Bank of England, Andrew Bailey, who not only rejected the possibility of introducing a negative interest rate, but also expressed his opinion that the coronavirus pandemic is unable to bring about any structural changes in the UK economy. As a result, the British pound showed its biggest gain in the past two months. However, after the general trend of dollar strengthening, the pair returned to the pivot point and closed the week at 1.3580.

The pair remained within the descending medium-term channel, and after rebounding from its upper limits, it moved to its center.

After reaching a historic high of $41,435 on Jan. 08, the BTC/USD pair turned south and fell to $30,600 by Jan. 11. All major indicators have long been giving signals of overbought Bitcoin, so this deep correction occurred. It was found in the form of an increase in the yield on US government bonds, which led to the rise of the dollar. As a result, the major cryptocurrency lost more than 25% of its price in just three days.

Then, to the delight of investors, the pair once again approached the $40,000 mark, and the US once again became the official reason for this. More precisely, President-elect Joe Biden, who announced a new $1.9 trillion economic aid package that includes $2,000 in direct payments to Americans. This massive fiscal and monetary stimulus is likely to drive inflation and, as a consequence, increase demand for risky assets, including cryptocurrencies.

It is known that all good things will end one day. So Bitcoin halted its growth on January 14th, and failed to set a new record high. Then European Central Bank President Christine Lagarde called for global regulation of the cryptocurrency market. Referring to the speculative nature of bitcoin, she stated that such regulation could start within the G7 countries, then move into the G20, and eventually expand to the global level.

It is worth noting that investor activity fell significantly at the beginning of 2021. According to CoinShares, only $29 million was invested in crypto funds in the first week of January. This is despite the fact that similar investments totaled more than $1 billion in the week before Christmas. Of course, this calm can be explained by a respite for the holidays. Moreover, crypto whales have also been slow to react to the correction on January 8-11: withdrawals were only recorded on a very small number of their BTC wallets.

PayPal data shows that the retail market is at least gradually waking up after Christmas and New Year's hibernation, and the volume of bitcoin trading on this platform has increased by 950% since the beginning of January, almost 10 times. If users of the platform, according to the analytical service Nomics, conducted transactions with BTC for only $22.8 million on January 1, 2021, their volume would have reached $242 million ten days later.
The total cryptocurrency market cap reached $1 trillion by January 15 (it was $1.13 trillion at the highest level on January 10). The BTC Dominance Index is in the 67% region, and the Crypto Fear & Greed Index has fallen from 95 to 88 points during the week.

Federal Reserve Chairman Jerome Powell dismissed the comments of his colleagues from the regional Fed, saying that one should not count on raising interest rates and curtailing soft monetary policy in the near future. These words, along with Joe Biden's new $1.9 trillion fiscal stimulus package, are likely to halt the rise in US Treasury yields and bolster the S&P500 bulls.

Moreover, hopes for vaccination, which will lead to rapid growth in GDP, have not disappeared. Thus, Wall Street Journal experts expect an increase in US GDP by 4.3% in 2021.

But will this break the current link between the dollar and the stock market? Will the dollar stop rising? It is not excluded that the growth of the S & P500 will be supported not only by Americans, but also by major investors from other countries. Such an injection of foreign capital into the US economy will strengthen the US currency.

Now, specifically about the EUR/USD pair. It is clear that at the time of writing the forecast, most indicators were painted red. 100% of the trend indicators on H4 and 75% on D1 as well as 75% of the oscillators on both time frames are heading south. The remaining oscillators are indicating that this pair is oversold.

As for the important events in the coming week, pay attention to the European Central Bank's interest rate decision and the subsequent press conference of the regulator's administration on Thursday, January 21st. Data on business activity for Germany and the eurozone as a whole will be published the next day, January 22nd. 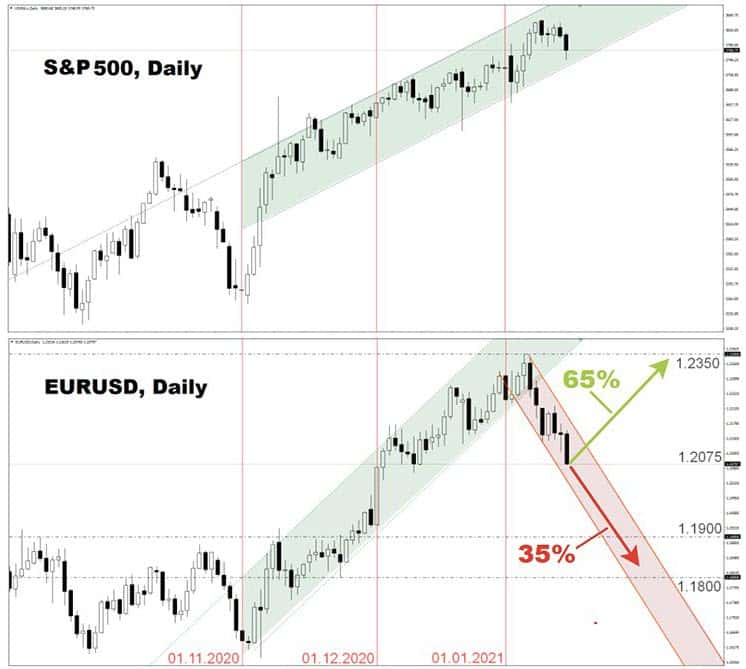 Not only Germany and the EU, but also the UK will release statistics on business activity (Marquette in the service sector) on Friday, January 22nd. This data could send a signal to investors about how the novel coronavirus attack will affect the country's economy. Recall that Britain earlier reported record levels of deaths and new cases over the past few weeks in London and the southeast of England.

However, the problems associated with COVID-19 are worsening in other countries as well, including the United States. Therefore, 60% of analysts, supported by graphical analysis on H4 and D1, believe that the pair will be able to return to the level of 1.3700, and possibly rise by another 100 points. An additional argument for its growth is the new fiscal stimulus in the US, which was discussed above. Support levels are 1.3540 and 1.3450.

The rise of the pair from the lower boundary to the upper boundary of the descending medium-term channel, which occurred in the first two weeks of January, is linked to an increase in risk appetite and a decrease in interest in the yen as a safe haven currency. Based on this, experts believe that the pair will still be able to breach the upper boundary of the selected channel and rise to the 105.00 region. 35% of graphical analysts and analysts vote for D1 for this scenario. The next target for the bulls is 105.70, and the closest resistance is the 104.00-104.35 area.

So, the total cryptocurrency market cap is now at $1 trillion. This is an important psychological level, especially for retail investors. Further growth of this indicator will be a clear confirmation of the predictions that at least the BTC/USD pair will rise to the high of $50,000. If the capitalization falls, it could cause a crushing sale of coins: the example of the crypto winter 2018 is still fresh in the memory of the market.

Meanwhile, the upbeat mood continues to dominate the market. Therefore, Bloomberg Crypto Analyst Mike McGlone believes that $50,000 is a real target for Bitcoin. He made a prediction a few months ago, according to which BTC was supposed to grow to a new historical level in December 2020, which eventually happened. “I think the asset will hit 50K in the near future,” the expert said, adding that the chances of BTC growth are much greater than further weakness, and a pullback to $20,000 is now practically unlikely.

Dan Morehead, CEO of investment firm Pantera Capital, expects bitcoin to reach $115,000 by August 2021, and events such as the launch of the digital yuan will help increase the penetration of cryptocurrencies into the global economy.

In fourth place is Michael Sailor, head of MicroStrategy, with assets of $ 600 million, and in fifth place is the founder of crypto bank Galaxy Digital Mike Novogratz. Forbes has valued his cryptocurrency assets at $478 million. The last on the list is ethereum co-founder Vitalik Buterin with assets of $360 million.