Biden warns Putin will pay a heavy cost if it attacks Ukraine, and gold stands ready 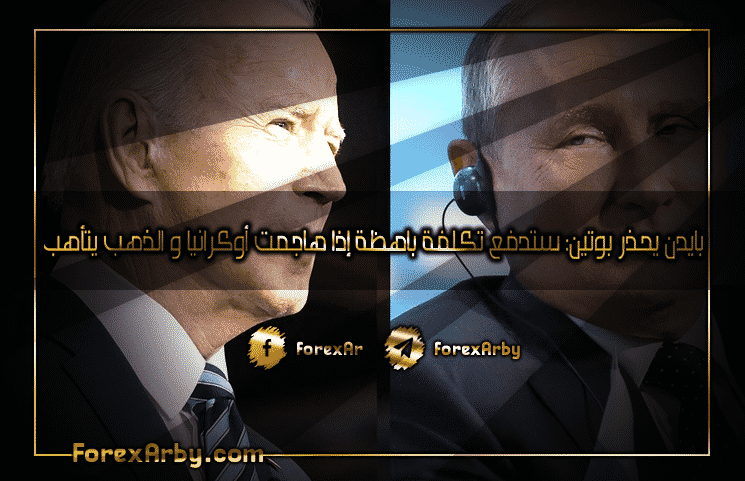 President Biden told Russian President Vladimir Putin in a phone call on Saturday that Russia would face "quick and heavy costs" if it chose to invade Ukraine, the White House said.

The call between the two leaders lasted about an hour on Saturday morning, as warning signs of a possible Russian invasion of Ukraine were increasing.

The US State Department said Saturday morning that the United States had ordered most of its embassy staff to leave Kyiv, and officials urged US citizens in Ukraine to leave immediately. Biden pledged that the United States and its allies would "respond decisively and impose rapid and heavy costs on Russia" in the event of an invasion, according to a White House statement.

"President Biden reiterated that a further Russian invasion of Ukraine would lead to widespread human suffering and diminish Russia's standing," the statement continued. “President Biden has been clear with President Putin that while the United States remains prepared to engage in diplomacy, in full coordination with our allies and partners, we are also prepared for other scenarios.”

The Biden administration has offered Russia a diplomatic way out, proposing talks on potential agreements addressing missile status and military exercises as a way to address Moscow's stated security concerns.

But these efforts did not succeed in persuading Russia to stop the escalation. Instead, Russia continued to mass more than 100,000 troops on the border with Ukraine and engaged in military exercises with Belarus.

The United States and its allies rejected Moscow's demands that NATO reduce its presence and prevent Ukraine from joining the alliance.

The Biden administration has threatened to increase sanctions and export controls if Russia moves its forces to Ukraine and works with European allies to reach an agreement on a sanctions package. The senior administration official said Saturday that those discussions "have reached a peak."

The Pentagon has also deployed 6,000 troops to Eastern Europe to help secure NATO allies, including the deployment of 3,000 to Poland just announced on Friday.

White House National Security Adviser Jake Sullivan told reporters Friday afternoon that Russia could take "major military action against Ukraine" at any time, including before the end of the Beijing Olympics. There was previously speculation that Russia might wait until the end of the Olympics on February 20.

Gold to the highest level in two months

On Friday, gold prices jumped to a nearly two-month high as fears of rising inflation and escalating tensions between Russia and Ukraine boosted demand for the safe-haven metal. Spot gold rose from $1,840 to $1,867 an ounce, the highest since November 19.

“Gold is seeing some inflows as a safe haven as we have geopolitical risks there and concerns about the impact of higher rates on global growth,” said Chris Gaffney, head of global markets at TIAA.

Gold is considered a hedge against high inflation and is often used as a safe store of value in times of political and financial uncertainty. In particular, moving to gold is the best solution to investors in Russia and Ukraine as a hedge against any possible sanctions on Russia or Ukraine in the event of a successful invasion. From there, gold may rise above the level of 1900 dollars.

However, technically, gold should remain above the pivot point 1840 over the next week if levels above 1900 are to be targeted.